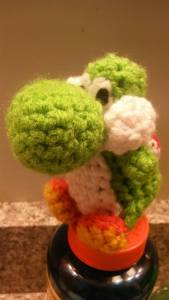 It has been awhile since I’ve posted a pattern. Alot has happened in my personal life so crocheting original patterns had to take a backseat.  I had a baby, who is now 10 months old.  He is in love with the mario character Yoshi, so much so that he has tried to chew up my Yarn Yoshi Amiibo for Yoshi’s Wooly World game.  In an attempt to save the yarn yoshi (he has electronics in him) I made this Yoshi.  I was nervous at first about how my little one would respond to it, but he is in love with him.  Everyday he runs to where Yoshi sits and “requests” that we pick him up so he can grab the Yoshi (Sometimes multiple times in a span of 2 or 3 minutes).  It’s the perfect size for his little hands, and the nose must be pretty tasty because he chews on it fairly frequently.  I’m thinking about making a whole set of mario characters in this style for him.

MY HUSBAND’S BOOKS
Buy a copy by clicking the book cover image.

This work is licensed under a Creative Commons Attribution-NonCommercial-NoDerivs 3.0 Unported License.

Have you heard of Ebates? It’s awesome. I use Ebates  to get Cash Back on almost everything I buy online.  They work with a  bunch of big-name brands like Koh’s, Walmart, and Amazon so I can always get money back form my favorite stores.  It’s free and super easy to use! Check it out!