For the first six months of our relationship, Beau and I were seperated by almost 200 miles. He was in Morgantown for his freshman year and I was enjoying my senior year in Saint Albans. Since Valentine’s Day was a Tuesday we both knew there was no way we could spend the day together, other than chatting on AIM like we always did. I wasn’t really expecting to receive anything from him either, so when I went to my mail box I was surprised to find a large manilla envelope amongst the usual letters. First I was just excited to be getting mail, and then curious about what he had sent me. When I opened it I found a note along with this picture wrapped in wax paper to protect it. He later told me this was the first time he’d ever given someone a drawing he’d done and since then I have received dozens. 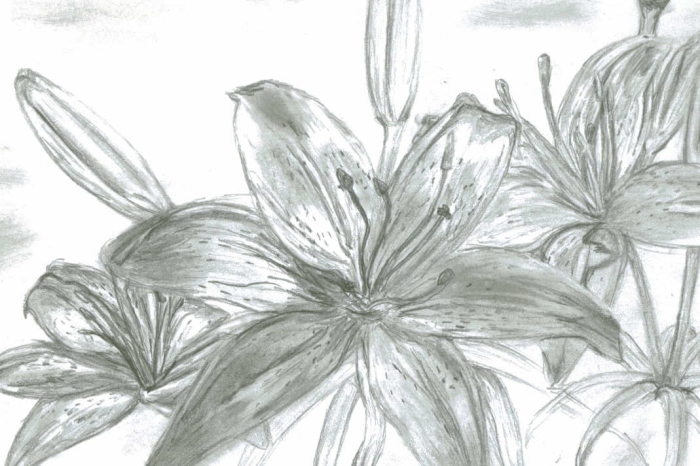 He gave me a tiger lily, because those are my favorite flowers. To date I have received four tiger lily pictures (one for every Valentine’s Day since we started dating). This is the first of the drawings he’s done for me that I will post on here. More to come later!

MY HUSBAND’S BOOKS
Buy a copy by clicking the book cover image.

This work is licensed under a Creative Commons Attribution-NonCommercial-NoDerivs 3.0 Unported License.

Have you heard of Ebates? It’s awesome. I use Ebates  to get Cash Back on almost everything I buy online.  They work with a  bunch of big-name brands like Koh’s, Walmart, and Amazon so I can always get money back form my favorite stores.  It’s free and super easy to use! Check it out!